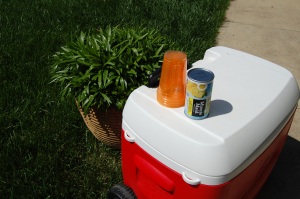 Do not forget the cups.

Cups of lemonade sold (to non-our-street-dwellers) at a typical stand: 5

Cups of lemonade drunk by neighbor kids and mine: 46

I don’t remember the last time I was bored.

It was probably in late 2000, when I was on bed rest with my son and everyone at work forgot I existed and I kept turning on TLC’s “A Baby Story” and coming to the conclusion that I’d already seen that particular episode… usually where someone was having a water birth with 25 members of their extended family watching.

My kids get bored on a fairly regular basis. This may mean that I have failed as a parent and that they will end up in therapy talking about how I didn’t give them tools to create a rich and fulfilling life.

They are out of school this week for Spring Break. Spring Break is also known as Pre-Summer for those of us who spend lots of time with our kids. It’s a reminder of the first few weeks of summer, when they yell at each other, “Nuh-uh! You are the one who never holds open the door for me!” And “All I want to do is play with her, but she won’t do everything I tell her to!”

I remember saying that to my mom and dodging out of the way afterwards, because she often looked like she wanted to slap me. Sometimes I even said it when there were friends readily available to me, and we were both (or all) bored. My mom practiced her eye roll on those days.

Usually, those of us in the depths of boredom would loll about on the floor, the ennui draining all lifeforce out of us.

Then, we would invariably pop up and say, “I know! Let’s sew strange monster creatures out of felt!” And we would go and cut out lots of different colors of felt and sketch out weird monster things and get all excited for an hour or so. Until we remembered that we couldn’t sew.

Then we would be bored again. Lolling. Thrashing. Cursing of the skies.

But the sky would make us think about the creek running through my front yard, and we would step into our flip flops and start out on an adventure of mapping the creek, which involved lots of mud and rocks and sticks and climbing and getting very muddy. Afterwards, we would go inside and drip all manner of mud up the staircase and take a shower, singing “The Star-Spangled Banner” at the top of our lungs. (I still know all the words very well because of our practice sessions.)

It was difficult to be bored after wading in the creek for hours and getting clean and having sung very loudly. So I would ask my mom if my friend could stay for dinner, and my mom would pretend that she wanted me to give her more notice, but really she didn’t care. And we would eat lots of food and be happy until the next day when we would forget how to be productive again.

My kids spend time outside playing every single day. Unless it is 34 degrees, and hail the size of turnips is pinging off the metal roof of our front porch.

Most days, they find something to do with other bored neighbor kids. On other days, they amble up to me and say, “There’s nothing to doooooo,” and my eyes roll around in my head.

That’s when I yell out, “Potions!”

Or even, dangit, “Hostage crisis!”

1. Potions. My kids might have outgrown Potions; we’ll see when the weather gets a little warmer. A neighbor dad used to bring a big, orange Home Depot pail over to our driveway (our driveway, you’ll note), and about seven kids would go to town, filling the bucket with water, dirt, pieces of grass, dead beetles, pom-pom streamer vinyl and other things large, scary birds might collect to feather their nests. You might think this game would wrap up in about 10 minutes. You would be wrong. Hours, I tell you. Hours. Of. Fun.

2. Lemonade stand. I send the kiddos out early in the day to proclaim lemonade stand time in the afternoon to the neighbor kids. Then we loving parents bake brownies or chocolate chip cookies or lemon bars and seal them in sandwich bags. I whip out a can of frozen Minute Maid lemonade concentrate and fill a pitcher. I usually forget the cups and have to run up to the grocery store. Sucker. Then the kids proceed to make signs, set up the table and put out their wares. The brownies melt in the sun, the chocolate chips leak all over the sandwich bags, and the ice only lasts in the cooler for a half hour at a time, because someone usually leaves the cooler open. The lemonade gets a lot of traffic. From our kids. The people who drive by our street on a normal day must decide to take a different route home, because no one stops or sees the kids yelling.

“Mo-om! No one is coming to our lemonade stand!”

“I bet they will soon. It’s getting later in the afternoon. Why don’t you have a cookie?”

“Come on, everyone! Let’s go advertise for our stand! We’ve got lemonade to sell, people!”

3. Hostage crisis. This is not in any way similar to Jimmy Carter’s hostage crisis. I don’t know exactly what goes on in this one, but it requires lots of yelling, rolling around on the grass and taking people to jail, which is interestingly in the same locale as the grass-rolling-around place. Poison has been mentioned. As I said earlier: therapy may be in our little darlings’ futures.

4. Police. All children ride bikes up and down the street, with utter disregard for one another’s limbs. Chasing after another kid on a bike making siren noises is what is known as “Police.” I think of it as “Potential Death Game.”

The ways this is wrong and scary: riding forwards but looking backwards, shrieking and hurtling towards stationary objects like mailboxes, veering sharply left or right when your pursuer is not skilled in defensive driving techniques.

When the Police game begins, I yell, “OK! Time to go inside and be bored for a while!”

At least with boredom, you get to keep all of your limbs. Just so you can loll about on them for another day.

14 thoughts on “In the Land of Lemonade Stands”