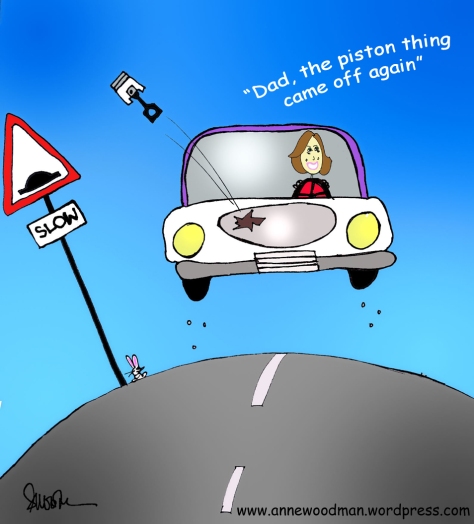 Age I was when we got a white Oldsmobile Cutlass: 4

Age I was when the very same Oldsmobile Cutlass became mine: 16

Random warning lights coming on in my minivan that mean exactly nothing: 2

Cars and I have trust issues.

I did not grow up around people who worshipped cars. No one in my family scooted themselves handily underneath a Mustang or got greasy fingers or patted the hood and said, “She’s a peach.”

I grew up in the kind of family where, when we went for long trips in the car, we inevitably ended up in the McDonald’s drive thru with my dad ordering a cup of cold tap water (for the car) and two Dr. Peppers (for my mom and me), the smoke billowing up from under the hood.

Later, from about age 7 to age 11, we owned a creamy yellow Volkswagen Beetle that made us backseat passengers feel like we were riding on top of a lawnmower engine. The seats were some kind of plastic-y hard material that never smelled quite right.

It didn’t have a gas gauge that worked, a point of contention between my mom and dad. They were each supposed to keep track of when they put gas in the car, and you can imagine how well that worked out.

One day, when my dad was out of town, my mom had to drive me to the pediatrician’s office, which was clear on the other side of Atlanta. On our way back, through a gorgeous richie-rich area of sprawling lawns and long driveways, the car gave a sputter and graciously rolled onto the beautifully-maintained grass of Old Money.

My mom was not in a good mood at this point.

We had to knock on the door of Mrs. Old Money, who was certain we were criminals. It might have made her feel better to know that the getaway car was not exactly able to get away. Always an issue for true criminals. I, however, would have been glad to hang out in her air conditioned kitchen for hours. The Beetle was like a malevolent oven; a loud, plastic oven. The back windows did not roll down.

That car long gone, I was lucky to get a car when I turned 16. It wasn’t the Beetle (hooray!), but a large, white Oldsmobile that we’d had since I was four.

It had a plaid interior.

And it could seat 17 of my closest friends.

I built a lot of character while I was in high school.

One morning after a sleepover at a friend’s house, I offered to go get doughnuts. My friend went with me. As we rolled up to a stop sign, my car decided it was tired. And cold. And would not start again.

In the era before cell phones, this necessitated knocking on some random person’s home early on a Saturday morning.

I’m starting to see a pattern here: I became a social person because our cars didn’t work. Is my extroversion due to unreliable cars?

While I was growing up, my dad drove a lot. Commuting was not what he considered a fun time. He parked in this big, scary place he called “The Pit.” It was one of those places with lots of graffiti, little ambient light and a plethora of potholes. It did not gain your confidence.

When I was in college, my dad’s car got stolen. You might wonder if the car was a Porsche or a Ferrari.

It was a blue Oldsmobile that had been my grandmother’s.

When it was recovered two weeks later, the only things missing were my sister’s mix tapes and a whole bunch of tapes of the “Police.” I have to wonder if the car thieves were weirded out or really liked “Roxanne.”

Today, I drive a minivan. Some moms and dads think minivans are uncool and shout to the world, “Parent Nerd”!

Me, I don’t care. As long as my minivan gets me from Point A to Point B, I’m good. It’s getting older now. Like many older things (myself included), not everything works at all times. The tire pressure sensor hasn’t worked for seven years. Friends who have ridden with me lean over and say, “Hey–your tire pressure… don’t you wanna check it?” And I go, “Eh.” Now, the “Check Engine” light comes on at random times. That sensor is broken, too.

The old feelings of mistrust are back. Each day driving is a potential breakdown.

Good news: I might get to meet some new friends when my car breaks down near someone’s house! I guess it’s time to start turning on the charm.