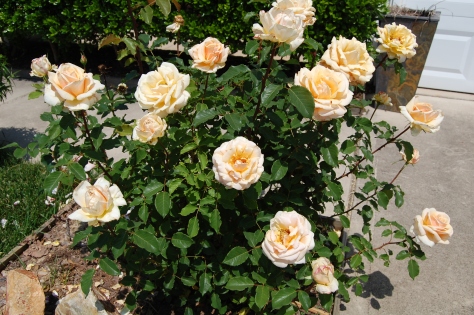 Yep. I stopped. I smelled ’em. Would you?

Flowers my husband has clipped to decorate our table in the last week: 11

Things I learn each day: at least 2

Things I don’t learn or forget: 2

When I was a young 20-something, living in my college town but graduated and working at a job that barely enabled me to eat chips and queso dip and a Coke ($1.99) once a week as a treat, I was once standing in a checkout line at the grocery store. A friend and I were discussing marriage or love or a couple who had just gotten married and was blissful or something.

The old lady standing behind us in line felt obliged to weigh in. “You know, it’s all about settling anyway,” she said. “You’re never going to get all the qualities you want in a husband, so give up that fantasy right now. We all just settle.”

Still today, I have decided that old people should not share what they consider to be “wisdom” with those of us too young to handle the truth. I feel that they should have learned compassion and wisdom and when to keep their mouths shut. Remind me of that when I’m old, which let’s face it, will never happen. Someone once told me it would, but I have chosen not to believe her.

I had book club the other night, and I hadn’t read the book. My friend used to be in a book club that they called “The No-Read Book Club,” but ours isn’t like that. You’re kind of expected to read the book. There have been a few times I haven’t, and when the other members start reflecting back on books we’ve read in the past seven years, I’ll start to disagree, like, “Oh no, we haven’t read…” and then my voice trails off, because I remember that I skipped that one or didn’t have the interest to continue after the bad first 723 pages.

Anyway, only three people out of five had read it, so I avoided a potentially meandering conversation about characters I didn’t know, and they didn’t drum me out of the group.

Our next book is Catcher in the Rye. I read it when I was about 13, and I remembered nothing. Pretty much nothing… except “Holden Caulfield,” and I wasn’t very impressed. A friend in my book club said, “You know, everyone read this book when they were younger, but no one remembers what it’s about.”

So I started reading it because I was desperate for something to read while my daughter was in dance class yesterday. I finished half the book, and, well… I’m not sure I’ve learned anything.

The writing? So good. The speed with which I can rip through it? Excellent.

The memory of what it’s about when I talk about it ten years from now? Nonexistent.

Have I learned nothing? Because I’m older and wiser, aren’t I supposed to be gleaning some wonderful morsel of intelligence as a sign of how far I’ve come since age 13? Am I on a course to being an old lady who accosts innocent young people in a grocery store and tells them to be prepared for a life of disappointment?

Should I start visiting middle schools and telling them to skip Catcher in the Rye and read The Hunger Games instead?

Here is what I have learned. And I know a lot of people will disagree with me. I can handle it.

1. Life is too short to read bad books. I don’t mean Catcher in the Rye. It’s pretty good, just somewhat forgettable. But I am firmly on the side of skipping or stopping reading any book that doesn’t resonate with you on some level. Drop it. Move on. Learn from the good writers; don’t waste your time with the bad ones. There are too many good books in the world to waste your time with bad ones.

2. Stop and smell the roses. I know; so Pollyanna. But they’ve proven that we all remember the bad stuff much better than we do the good stuff. Take your time to let the good stuff sink in so you don’t terrorize idealistic young ‘uns someday.

3. Give other people some good stuff to remember. I followed a teaching assistant down the hall today to tell her that my daughter’s class loved getting her for a substitute. Simple, right? She started crying. She said last night had been really horrible, and hearing something nice really helped.

4. When you’re an old person, give young people something to look forward to. Climb a big mountain or take up paragliding. Stay out of the grocery stores; send those young whippersnappers to do your chores. Hopefully, you’ll have more interesting things to do.

What are some life lessons you’ve learned? What would you never tell a young person? What do you wish you’d known?