I love camelias: just when you think that nothing else will bloom until spring, beautiful, puffy, pink flowers explode.

Quart of Goodberry’s pumpkin ice cream given to me by my BFF: 1

It’s a funny feeling when you find yourself starting over.

Everyone does it at some point in life: maybe the weight you thought you’d shed forever has come creeping back, or the marriage you thought was forever ends, or the children you thought would stay toddler-sized for more than a minute head off to college.

At age 40, some of the same feelings I had at age 20 have come creeping back: that stepping-off-a-cliff feeling, the anticipation of a new adventure with a fear of the unknown thrown in there.

Back when I was 20, I spent a summer interning at CNN.

My intern supervisor was older and sophisticated in a hipster sort of way. At the seasoned age of 26, she had her own cubicle with a tacked-up magazine photo of Right Said Fred, a bald pop star who sang about being too sexy. Her friends had hung it there for cool, ironic effect.

Everything was done for cool, ironic effect.

I was overdressed and overeager, ready to tackle any new challenge, whether it was holding the large, silver reflective disk to better light “the talent” as they did their standups, or cataloguing B-roll for later use.

The CNN Center was an overstimulating playground for interns, full of newsy types in glasses rushing around and a revolving chair of anchors being made up before they went onscreen. Computers lined the atrium high above the newsroom, and we could stop by on our way to running errands to check in with the inter-web about entertainment news or the latest on the Gulf War.

The budding Information Superhighway was befuddling: I was never sure what to search for.

I had a crush on one of the two guys interning in the next Cubicle Town: he wore a hemp bracelet and ironically distressed jeans. He found it laughable that I had never heard of Haight-Ashbury.

His friend, a tall, goofy sort with curly, dark hair and appropriate work clothing kept asking me out: to dinner, to lunch, to coffee. I don’t know why I was so indifferent: I mentioned a boyfriend, the one who thought we were on hiatus. One time, a Georgia Tech guy I dated only to pass the time while my friend flirted with another Georgia Tech guy sent me flowers to my intern job. The goofy CNN guy stopped asking me out… just about the time I decided I would go.

Each time I would arrive at work, I would try to imagine working at CNN after college. I couldn’t.

That summer, we sifted through over 500 resumes from Ph.D.s, chefs and actors hoping to lend their talent to our show.

One day, after I had spent my morning holding the silver reflective stuff for one of “the talent”–a female comedian from L.A. who found our footage of singer Steve Miller punching our cameraman so distasteful she had to watch it a few times, muttering, “He thinks he’s so cool” over and over–I stood in Cubicle Town waiting for my boss to give me my next assignment.

In the once-abandoned cubicle next to me, the new guy, the “new talent,” was setting up shop.

He was old and married, about 30, with either an ironic or hopelessly uncool small mustache.

As he unpacked the box of his work belongings and laid them out on his desk, he asked me, “So what is it that you want to do?”

“Maybe producing…” But I still didn’t understand what producers did. (Before I started playing violin, orchestra conductors seemed completely extraneous; all they did was wave their little sticks around while the musicians did all the work.)

He gave me a kind look. “You know, you’re pretty enough. You could be on camera.”

He nodded and went back to arranging frames and pencils on his desk.

When I was back at journalism school that fall, giving wooden deliveries of school news stories, I thought about the “new talent” guy. I hoped his calm, kind, un-ironic, innocent hopefulness triumphed in a fast-paced world of super-cool.

I hoped I would discover what I should be searching for on the new Internet.

Most of all, I hoped my own talent would emerge before it was too late.

My daughter drew the picture; my son edited it on Photoshop.

Miles run today: 3 (not enough to counteract the 1 ice cream)

I bought my husband something for Father’s Day that might not have been a great idea. He’s going to run his first marathon in November, so he can’t yet put a magnet on his car that says, “26.2.” So I got him a nifty magnet that says:

After he put it on his car, I studied it and wondered if maybe I was sending the wrong message to his fellow drivers. Like maybe they would read it after he signaled and changed lanes and think, “Ooooh. So now this guy is threatening me. Okay buddy, I’ll run. Run over you.”

Back when we were dating, I got worried about my future husband because he liked to help people in other cars. I decided it must be because he didn’t grow up in The Big City like I did, and also, in England, the people you stopped to help probably weren’t carrying guns.

One time, two of his friends from England had come over to visit, and we took them to the beach, which was two hours away. We spent the day there, and after getting too much sun and sand, we headed home. About thirty minutes into our trip, we spotted a couple on the side of the road who were on a little trip of their own.

“Stop the car!” he said. “They look like they need help.”

We have a word for that where I come from: foolhardy. Also, sometimes, dead.

So we stopped, and I gnawed on the dashboard because I’m not a big nail biter. I watched through the rearview mirror as the people wandered around in a fog. I reviewed the steps for flagging down police officers, administering CPR and the little I had seen in movies about removing bullets with a pocket knife.

When he ran back to my car and said, “Let’s go,” he seemed peeved that the people were so high that they didn’t care if they got help or not.

I was just glad all of his major veins and arteries were functional.

We got back home without further incident, and from that day forward, I didn’t have to allow an extra hour of drive time in my planning because of drug addicts who had forgotten to put gas in the car.

It was around that time that a stray cat wandered into his life. He named her Flo and used every extra penny he earned (not much exaggeration involved here) to pay for her food, her litter box, and the three kittens she thoughtfully birthed in his apartment.

While helping down-and-out types at the side of the road earned my grudging respect, his care of Flo and her little ones made me realize that he would make a great dad someday. For his charges, there was no expense spared and no need unmet. Those kittens didn’t know how good they had it.

Our kids may not realize their good fortune until age 30. But I sure do. He’s the most terrific dad ever.

And I want to thank the druggies who did not have the money to buy a gun all those years ago. 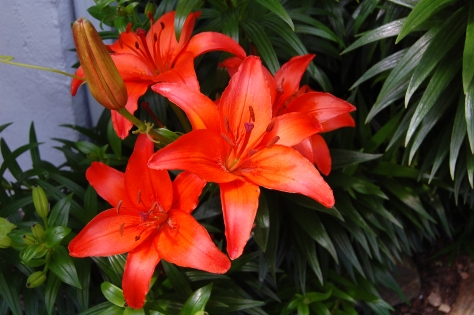 Just call me the crazy, flower-loving lady. That, or Queen of No, which I am also loving right now.

Do not, I repeat, do not tell my children or my husband that I had a Goodberry’s chocolate milkshake for lunch today.

I do not advocate poor nutritional choices. But seriously. It is a big, puffy cloud day with a gentle breeze and bright sunshine, and I did not have time to create a nutritionally balanced salad with homemade salad dressing. Do not judge me.

I remember back when I was just out of college, and my good friend and her roommate decided to drive six hours and visit me over Labor Day weekend. The weather was just like today… for three days. If you have never been in Chapel Hill when the weather is perfect, you have not yet lived.

We spent the entire weekend outside, drinking margaritas on the deck at Pantana Bob’s, walking around campus, eating good food that I normally couldn’t afford…

And I wanted to say, a la Julie Andrews in Sound of Music, spinning around in a traditional German skirt thing, “Why yes, I have ordered up exactly the perfect weather for your visit. In fact, we Chapel Hillians live in relative perfection 364 days of the year.”

Those three days almost made up for the fact that I was living below poverty level in a brick apartment on the first floor with walls that had not yet been acquainted with insulation. And that the guy who lived above me owned both a waterbed and a shotgun. I didn’t know about that yet. More on that in a later post.

Today is the most gorgeous day. The lilies are blooming outside my office window, and the mockingbirds are fighting each other off as one after another tries to invade the Woodman turf. Our mockingbird is stronger than your mockingbird, dude.

This morning, I wrote an article and then spent an hour “helping” a few fifth graders with mock end-of-grade tests. We read passages about how to construct owl luminaries, why beekeeping is an interesting hobby and how Laura Ingalls Wilder used to respond to every fan letter she received.

I almost missed an answer. But ha! I had the answer key and quickly covered up my adult-ish erroneous response. I explained, in a responsible, teacher-y way, why “C” was in fact the right answer, even though, trust me, “A” would have worked just fine.

Then, I rushed to the library and had 15 minutes to grab “lunch.”

Let me tell you: sitting outside on a gorgeous day gulping a chocolate milkshake may be one of those “what would you do on your last day on earth” things.

And then, because I was on such a sugar high, I didn’t even start crying when they told me my favorite contact lenses, the ones that it took five years for me to settle on because I have that annoying dry eye problem, aren’t being made anymore. And remember, I don’t really have any tears, so…

Better just to enjoy the perfect weather. I’m using all my karmic bank account to try to order up some perfect weather stuff for when my father-in-law and stepmother-in-law visit in June. If they’re lucky, they can join me at the outside seating at Goodberry’s.