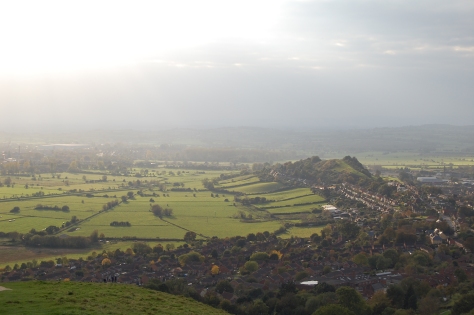 The stuff of Arthurian legend.

Accents employed in the novel I’m reading to the kids: at least 12

My parents bought me a tape recorder for my 10th birthday.

I remember the moment I got it: we were sitting in the dining room, eating birthday cake, and when I opened it up, my mom told me to hit “Play.” She was singing Happy Birthday to me on the tape.

I had one blank tape and rewinded it and recorded over it millions of times. Once, when the tape got tangled and mangled, I brought it in to the summer day care camp counselor, and she used her abnormally long fingernails to fix it for me.

My tape recorder was the ticket to fun. My friends and I would do nonhumorous comedy skits with characters like Malter Tondike and Baba Wawa doing news stories. We would go to the wood floors of my foyer and use a high heel shoe to mimic the sounds of someone walking, then incorporate those sounds into a raucous commercial for Fantastic Shoes, complete with a jingle exactly as lame as the jingles used in real commercials. We were certain we would be hired to write jingles as adults. And sing them, too.

But the one thing I could never do was accents. This made me very sad.

I realize now that the reason I could never do accents was that I didn’t know anyone who had an accent much different from ours.

Sure, there were our friends, the Italian New York transplants across the street… they said things like “Shut the lights” when everyone in Atlanta knew that we turned off the lights. They made exotic things like lentil pasta and chocolate pudding cake and had their very own pool.

Their accents were about as exotic as it got.

But as I got older, you may be shocked to hear that I met people with different accents. I loved them. I especially loved how these people from far-flung places like Germany and South Africa and Alabama didn’t even have to contort their mouths to make very different sounds come out.

And then I met my future husband. He was from England, and we all know how English accents can make people sound smart.

To this day, I cannot mimic his accent. His has become bastardized by the Southern American accent, and the blend of the two is too complicated.

But I realized that I could pretend I had cotton balls in my mouth, or marbles, and approximate a posh London accent. Or rough it up and sound like I had lived life on the mean streets, looting and pillaging and rooting for Manchester United.

We got to know some people with Latin American accents, and all of a sudden, I had an Antonio Banderas vibe.

I mimicked California surfer dudes and Russian diplomats and yet had to ask my husband to translate for me when we watched “Trainspotting.” But overall, I started to get the hang of listening and approximating.

When our kids were born, and we started reading to them, cowboys took on a Midwestern/Texas twang, and the Country Bunny with the Little Gold Shoes spoke with a South Carolina-smooth voice.

We used to take turns reading to the kids, but once we got into the Harry Potter series, a.) my husband kept getting horizontal and falling asleep in the middle of chapters and b.) the kids decided he didn’t do a satisfactory English accent.

1.) In case you’ve missed it, Harry Potter and his friends are English.

3.) My husband was not up to the challenge of speaking with an English accent. He is a bit miffed about it to this day.

So it’s up to me to make all of the villains English, harsh and imperious, and the poor protagonists gentle and Southern. You might call it brainwashing.

Unfortunately, I fall into the trap of making the leaders in Insurgent English, smart and in-control, and everyone else pretty basic. No matter that the whole thing takes place in future Chicago. Four/Tobias is the owner of a deep, gravelly voice and no particular accent, not even a Chicago one.

When I forget which character has which accent, the kids are so keyed into the plot and the sounds that they get confused.

“Wait a second. Did you say Therese or Evelyn? I think you’re doing the wrong voice,” my daughter will say. And then I have to go back to the paragraph before and start over.

Tips for accents: if you want to do a voiceover for something posh American people want… say, a Lexus, or a Mercedes, or really expensive toilet paper… learn a great English accent. You will be rich.

Or if you want to read to your kids, they probably won’t know the difference between a rough English dude and a female Russian spy. But it might help you have more fun at bedtime.

Extra points if you take that little rectangular tape recorder and catch it on tape. Even better: YouTube it for posterity and tell me how to find it. I can always use another good accent.