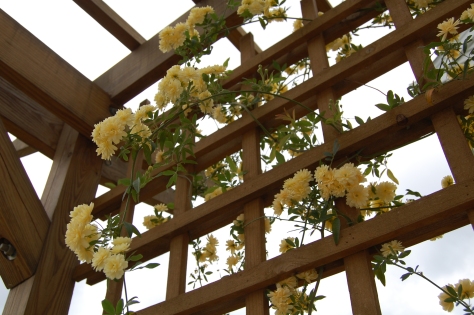 I love the bright yellow of the Lady Banks Rose against the gray sky.

Place in my age group: 1 (I told all of the other people to stay home.)

1. Try not to shake your booty to “Now That We Found Love” by HeavyD & The Boyz. Crank it up and just try to stand still.

2. To inspire trust in others, shake your booty.

So my BFF and I were standing at the edge of the Tobacco Trail on Saturday morning, at a time when normal people are sleeping or watching the Today show or drinking their first cups of coffee.

It was a return to the scene of the crime: March 2011, our first (and only) marathon to date. The sun was coming up, the air was crisp, people were standing around with bib numbers pinned to their chests, and I was struggling with PTSD.

But then we walked over to the Start line, and HeavyD & The Boyz were telling me that we’d found love. What were we gonna do with it?

“Seriously. You can stop dancing now,” my BFF said under her breath.

But I couldn’t. Because they played every dance song from every club night I’d had during my college years: “100% Pure Love,” “What Is Love?,” “Gonna Make You Sweat (Everybody Dance Now),” “Groove Is In The Heart”…

How could I stand there and be cool, indifferent to the mind-bending lyrics: “Gonna make you sweat til you bleed/Is that dope enough? Indeed.”

So I shook it.

And I’m telling you: people trust someone who is shaking it.

People kept walking up, asking sheepishly, “Would you?,” handing me their iPhones and asking me to take their pictures. I mean, handing me their prized iPhones was akin to them letting me hold their ears or their extra appendages or something.

My mind might have been screaming “gormless,” (photo subjects kept explaining with very specific gestures, “THIS IS THE BUTTON YOU PRESS TO TAKE A PICTURE.” It was a camera. Who knew?)

But my body was screaming “trustworthy.”

Obviously, my dancing makes people want me to… stop.

You may get a complete picture of my super-cool middle school career by my telling you that I was on the winning square dancing team for all three years. Yep. It’s true.

The couple of weeks of square dancing usually took place in the winter, and we huddled in the gym in our shorts and t-shirts, anxiously anticipating the prospect of hand-holding with the opposite sex and acting goofy in front of half of the sixth grade class.

In sixth grade, I went into the square dancing set-up with a “stay cool” attitude, much like that of my peers. No cute boys ended up in my square dancing circle, but maybe that was for the best. I could concentrate on the cute boys in other groups as I spun and twirled with a nonchalant, sophisticated demeanor.

But it was a competition. And there was music.

So when “Red River Gal” incited us to get country-wild, our group decided to attack the competition with ironic abandon. Boys with sweaty hands swung and do-si-doed and twirled with me. They were definitely cuter when they were dancing. All that was missing was the cowboy boots.

At least, that was the idea.

It was nice to win, even something as uncool as square dancing. And honestly, I was uncool in so many other ways, I don’t think the square dancing counted against me in any significant way.

(Except that it was years before a boy wanted to hold my hand outside of square dancing. Years, people.)

In both running and dancing, I have learned:

1. You can love to do something, but it doesn’t always translate into insane ability.

3. If you shake your booty, people will trust you, even with their valued appendage-extensions.

I am wondering how all of this will translate into a job interview situation. Thoughts?

Is there a song that implores you to shake your booty? Do people around you beg you to stop? Or do they ask you to demonstrate the latest dance moves?

Times I have heard a song and wanted to dance: 5 million

Dance classes I have taken: 6

Offers I have received to dance at Julliard: 0

Last night at book club, one of our members was late because of the tennis lessons she and her husband were taking. Talk turned to which classes we would all like to take, the skills we would like to gain. One said rug tying, which was new to me. A couple of people mentioned some form of dance, like salsa or ballroom. I started telling about my own aborted tries at dance, and we all scaled our expectations down to line dancing. Maybe not even something complex like country western, but something more akin to the Electric Slide.

Dance and I have a sordid history, much like my relationship with orchids, which is fodder for a whole other post some day. Remind me to tell you about my phaleonopsis-murdering tendencies.

I would like to say that my lack of coordination is genetic, like that my long limbs are ungainly and far from the prima ballerinas who top five feet in their pointe shoes. But my sister took ballet for years and was gorgeous and graceful and has cancelled out that particular excuse for me.

Back in college, my best friend and I decided to fulfill our P.E. requirement by taking Intro to Modern Dance. Our instructor was about five feet tall with funky heels on, wore dancer-y clothes that draped just so, and moved like a cat. But better.

The people in our class were ex-high school dancer types who knew how to sashay and leap and curve their pinky fingers. My friend and I looked like elephants in a room full of swans. The teacher kept us up in front so she could keep an eye on us. Or maybe so we didn’t run into anything in the back of the room… she was saving us from ourselves. By the end of the semester, we earned a B+ and felt pretty good about our effort.

For some reason unknown to me in retrospect, we signed up for Intermediate Modern Dance. For those of you who haven’t signed up for any classes in a while, “Intermediate” means “the gloves are coming off” and “beware all who enter here.”

We skipped into Intermediate like innocent little lambs to a slaughter.

Seriously, I have never listened to a Michael Jackson song again without a frisson of anxiety. He had rhythms in his music that make dancers laugh with glee and non-dancers (ie. me) cringe with unworthiness. The entire semester was spent perfecting the first thirty seconds of “The Way You Make Me Feel.” And we didn’t. The basement room with dank smells and wall-to-wall mirrors and 9 a.m. elephantine dancers had become my dance teacher’s prison. Each time we showed up, she seemed both dismayed and incredulous that we kept coming back only to fail miserably.

There was some kind of belly-dancer-esque wiggle thing that we could not even approximate, and there were micro-movements when we couldn’t even get the macro ones. There was a lot of eye-cutting and giggling, but because we respected our very serious teacher, some serious trying on our part. Michael Jackson, who was still alive at the time, would have turned in his grave.

And at every wedding reception, I’m the one at the back, no the side, no turn the other way, of the Electric Slide.