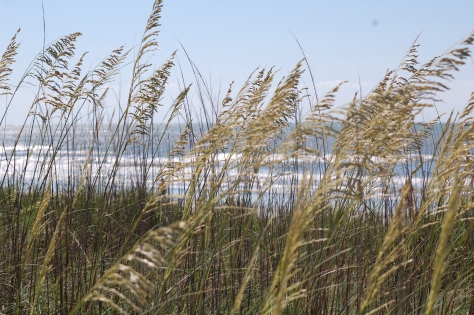 Days in the ocean: 4

Miles run with my husband: 7 (ha! tricked him again!)

Words written in my novel this week: 0

In the vein of those corny plaques you can buy about fishing and golf, I’m of the opinion that a bad day at the beach is better than a good day most other places.

I have never been to the beach in June here in the South where the weather was so cool, the water so warm. It was pretty wacky.

My husband’s parents are here from England, and my mother-in-law is used to swimming in bone-chilling water and shares some DNA with polar bears, so she was fine. The rest of us plunged into the waves and tried to stay under the water as much as possible; to venture out into the wind was an act of foolishness.

I try to remind myself to stay submerged when I write. Sometimes I find it easier than other times.

When I first started writing for the newspaper, I feared personal columns. There were a couple of columnists who wrote about their lives, and I cringed when I thought about exposing my feelings, the lives of my family and my past to public scrutiny. What if I wrote something that no one could identify with?

What if I wrote that I loved the beach, and people thought I was crazy? Only kidding. Everyone loves the beach, right?

Well, not my mom.

And then, that whole thing that’s supposed to happen when you’re middle-aged and forget to stand up straight to pull in your belly or when you throw caution to the winds and ditch the mascara for the day without caring happened to my writing.

I realized that by staying in the water and not trying to keep coming up for air, my writing improved. Or at least, it improved from my rather limited perspective: all of the truth spilled out of it.

How do you access truth in your writing? Do you ever have a cringe-worthy moment when you write something personal that you wouldn’t want a reader to know? Or do you feel free? 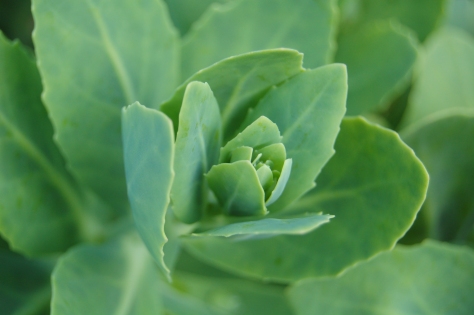 This photo (from Boone, NC) has absolutely nothing to do with this post.

How old you have to be to finally learn life lessons: older than I am, clearly

Age my son was when he said he would never buy a Mac: 7 (I asked him to sign and date this proclamation, like any good parent would.)

Age my son was when he changed his mind and said he wanted an iAnything: 9

I am almost 40. You young people out there might think I am aged and now know everything. I might even think that myself sometimes. But it is (mostly) untrue.

One thing I do know: never say never. It’s kind of like a reverse of that drinking game from college, “I Never.” Except that it’s about “I Will Never…” Yeah. Both of these things will lead you down a bad road.

1. Jeans wearing. I think I was about 14 when my friend told me that her mom said bell-bottoms were going to come back into style. I laughed. I said, “Never, ever will I wear jeans that flare out at the bottom. Seriously? Jeans makers would never be that stupid,” as I peg-legged my jeans. (Note: for the uninitiated, peg-legging was absolutely essential to looking cool circa the mid-1980s… it involved folding over the bottom hem of one’s jeans and making it as tight as one possibly could, then rolling those jeans very, very tightly up one’s leg.)

Jeans didn’t start flaring out for several years after that, especially in the non-fashion-forward places I chose to live. But it happened. And yes, I bought some jeans that weren’t tight at the bottoms. And life was good.

Until I said, “I will never again wear unflatteringly tight jeans that come in at the bottoms.”

Yeah, that happened, too.

Then I started wearing a lot of dresses.

2. Aging. Just so you know, aging happens to other people.

Until it happens to you.

This is unfortunate. When I was dewy-young, unblemished and unwrinkled back in The Day, when my 30s were a far-off, imaginary thing, I used to laugh at dry-eye commercials. That pretty actress from Northern Exposure who said she couldn’t produce tears? I laughed at her.

Note: I do not recommend this behavior.

I think I may have said something like, “That will never happen to me.”

Then my 30s came, and I was a washed-up, aging, wrinkled, sun-overexposed, dry-eyed person.

I would cry about it, but I don’t have any tears.

3. Running for more than 3 miles. I distinctly remember calling my mother on the day my sister ran her first half-marathon and saying, “Who in the world would choose to run for two hours? Two hours?”

If you’re getting the gist of my post, then yes, that was later to be me. Almost five hours? Yeah, that was me, too. And, as one of my favorite bloggers pointed out, I paid money for the pleasure.

4. Writing about my life for people to read. My sister got worried about this one when I started writing fiction. “So, uh, are you going to, uh, write about your life?” Which I kind of wondered at the time if it meant, “Are you going to write anything really embarrassing about me?” And I thought and thought and thought about it and couldn’t think of anything embarrassing enough to write about her. So then I said, “No, never. I’m not that interesting.”

But then I discovered blogging, and I’ve gotten to mention her a lot. And I still can’t think of anything embarrassing to write about her. Dangit!

5. Changing technology. On a near-daily basis, I hear other people saying things like, “Oh, they’ll never stop making hard copies of books.” I shudder and make a secret sign of warding off evil when people make loud declarations like this.

When I was in fourth grade, they showed us a (VHS) video of technological advances scientists were working on for the future. I was already pretty jaded, since re-runs of The Jetsons had made me think we were supposed to be a lot closer to living on space stations, having robot maids and driving in flying cars. So when they showed footage of people in some city in Japan testing out automatic cars with maps that guided them to their destinations, I think I muttered something cynical like, “Well, that’ll never happen.”

And now, although current GPS routes take friends and loved ones on a roundabout course through various apartment complexes instead of on normal streets to get to our house, I guess we made it. Technology has arrived.

So, Life Lesson #243, which I may never learn, is to avoid the use of “never” in any and all verbal discourse. That counts 20 times over when you write it down or make a video. When you catch yourself using this verboten word (examples: “I will never…” “They will never…” “It will never happen…”), take a drink. Maybe that way, you and the people you know may never remember what you’ve promised never to do.